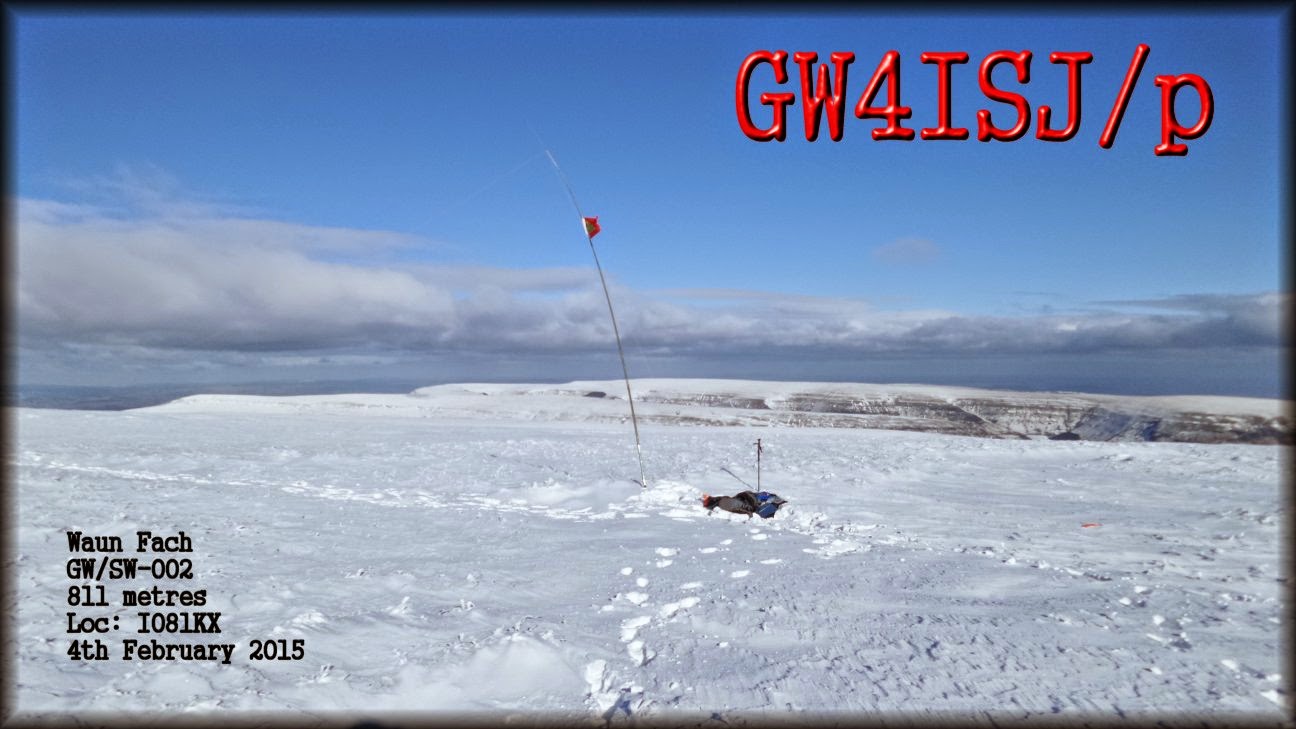 Well, I almost bit off more than I could chew today. For some reason last night, I changed my planned activation of Mynydd Troed and Mynydd Llangorse to Waun Fach.
The reason was primarily based around the forecast of severe icing above 400 metres.
There are two issues with that. The lane up to the Mynydds, from bitter (cold) experience, can be an ice rink.
The actual ascent of Mynydd Troed is very steep and probably needs crampons in these conditions.
For that reason I thought I'd go for a longer walk (8 miles in the end) on the easier more gradual ascent of Waun Fach.
Easier than what I ask myself. It was pretty obvious right from the start that this was going to be no walk in the park. The track up to the Grywne Fawr reservoir was a sheet of ice in places where the thaw from yesterday had frozen solid.
Luckily I was wearing my Yaktrax15 .

After a quick rest at the reservoir dam, I started out for the climb to the summit.

This is where I'd underestimated just how much snow there was! I was knee deep most of the time and at one stage entered a hole up to my waist. I had to sit and think about how I was going to get out of it

It took me an hour from the dam to cover the 1 mile to the plateau at 811 metres. I was so shot that I didn't have the energy to try and find the summit a few hundred yards away.

As predicted the temperature on top was minus 3ºC and with the strong wind it definitely felt like -10ºC.
And the wind was to have the last laugh...

I donned 2 extra layers, set up and got ready to operate. As I said the wind chill was quite extreme and before I'd even touched the key I decided on getting into the Bothy bag. I got tucked up inside but it was all wrong. I was facing the wrong way and the bag was covering my face. I tried adjusting myself without success, so decided to stand up and readjust the set up. That's when it happened!

A momentary lapse of concentration whilst getting up, the wind filled the bag like a spinnaker, ripped it out of my hand, and it went careering away towards South West Cymru. I vainly tried to run after it, pencil in mouth, ear phones in ears and thigh deep in snow. A bright yellow flash was last seen rolling and tumbling merrily across the valley towards Mynydd Troed, laughing as it went
Gone with the wind!
There was a bit of cursing and swearing at my stupidity, thank god I'd already erected the antenna, because after my marathon attempt at chasing the runaway, when I first turned round I couldn't see where my kit was!

Anyway I had a quick run on 20 metres, all the time the snow was blowing and filling up every crevice it could find on my kit. When the run on 20m dried up I was pretty cold and decided that discretion was the better part of valour, and it was wise to pack up before the cold could become a critical issue. I'd had enough fun for the day so far. Apologies to anyone waiting for me to appear on 10 and 7. It just wasn't to be today.

So it was pack up time and just as I was about to leave another hiker appeared. I thought I'd the place to myself but just shows there are other mad people out there too. He of course was wearing snow shoes. Who was it that mentioned them just a day or so ago! 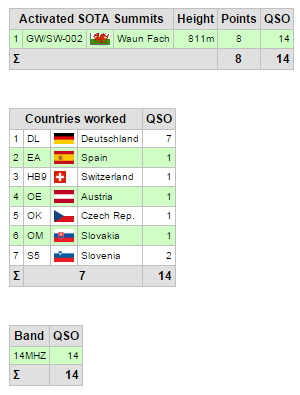 It was much easier descending, although still hard work. It was nice to be back on a solid path once I reached the dam, at least I could tell what was under my feet.

Beautiful day even with the loss of the Bothy.
Hope someone finds it that can make use of it .
More photos here.

Email ThisBlogThis!Share to TwitterShare to FacebookShare to Pinterest
Labels: GW/SW-002